Maia Press, an imprint of Arcadia Books, is proud to announce that
Ketil Bjørnstad’s To Music
has been long-listed for the
The Independent Foreign Fiction Prize 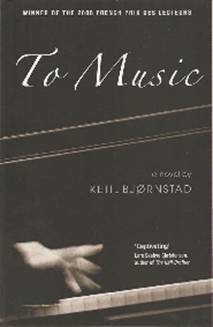 As Tone Sutterud has pointed out in The Independent, Ketil Bjørnstad’s latest novel is ‘an enchanting tale of love and death, desire and loss, about how parents and mentors manipulate and ultimately fail the young people entrusted to them.’

Sixteen-year-old Aksel’s mother, drunk and angry after a row with his father, is swept away in a swimming accident. Unable to come to terms with her death, the family sinks into isolation and despair. But the music that his mother loved gradually becomes Aksel’s sanctuary and his reason for living.

A talented pianist, he dedicates himself completely to his vocation in advance of a make-or-break competition. He and his fellow-musicians live in a feverish atmosphere of competitiveness, and intense and intimate isolation in which eroticism and obsession flourish. Aksel, obsessed with the mysterious, beautiful and talented Anja, is drawn into a relationship he cannot control, filled with secrets and dark suspicions.

In the Financial Times, Henry Hitchins praises ‘Bjørnstad [who] diligently maps out a plot that’s charged with Gothic intensity, as the creepy adults repeatedly forsake their sensitive dependants. The main strength of the novel is its evocation of the pathology of adolescent rivalry’. With unsettling complexity, the author also raises questions about the creative process itself: is it ultimately possible to produce our most exquisite art forms without too high a price in personal suffering?

Deborah Dawkin and Erik Skuggevik, the translators of To Music, have both also been applauded for their translation. Paul Binding calls their rendition ‘most sensitive’ (Times Literary Supplement), while Tone Sutterud states that ‘[they] have done a fine job, particularly in the musical passages’ (The Independent).

Ketil Bjørnstad, born 1952 in Oslo, is well known as a Norwegian pianist and composer who enthusiastically embraced the emergence of a new European Jazz. He is also an equally accomplished writer, having published some twenty books. His novels include The Personal Motive, The Storm and Villa Europa. In 2001, Arcadia published The Story of Edvard Munch, a literary biography of the great Norwegian painter. To Music is also the winner of the 2008 Prix des Lecteurs.

To see the complete list of novels nominated for the prize, and read Boyd Tonkin’s accompanying feature about this year’s diverse group, follow this link

To Music by Ketil Bjørnstad is available for purchase in bookshops and online via Amazon Please contact gary@arcadiabooks.co.uk for further information.